The Dawgs scored early and often against the host Raiders, building a big halftime lead, then utilizing a second-half running clock on their way to a quick getaway out of McConnellsvile, and 44-13 victory.

Tri-Valley – now 1-0 in MVL action and 2-0 overall – preps this week for another out-of-conference venture, and a big one…. the seventh annual ‘backyard-battle’ with their nearby neighbors to the south, the Zanesville Blue Devils.

In Friday night’s Morgan win in McConnellsville, Tri-Valley wasted little time in lighting up the scoreboard, pushing the Raiders so far back on their first possession that they gave up their goal line, resulting in a quick two points and safety for Tri-Valley and a 2-0 lead.

The ensuing kick-off spelled more doom for the host Raiders, as multi-talented and two-way starter standout Scottie junior Blake Sands (see below) returned the Morgan kick-off 67 yards for a TV touchdown and – after a Kaden Bay PAT kick – a 9-0 Tri-Valley lead. 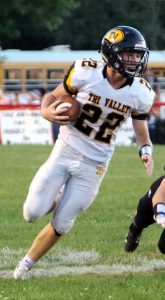 A Morgan Raider three-and-out saw the football back in the Scottie’s possession, where they quickly moved downfield and capitalized one again on a Sands score, this one a 25-yard rushing touchdown, which with another Kaden Bay PAT kick, made the score 16-0 in favor of the visiting  Scotties.

Sands added his remarkable fifth touchdown (has any Scottie scored more in a game?) in the third quarter – a one-yard scoring plunge – then another Scottie standout placekicker – Morgan Williamson – added a PAT for a 44-6 lead for the visiting black-and-gold, at the 7:32 mark of the third quarter.

Tri-Valley and Morgan second and third team gridiron rotations took the field for the remainder of the ‘clock-running’ contest, with the host Raiders adding one more score on another Lucas Walters’ end zone visit and the final 44-13 tally.

Statistically for the winners, Tri-Valley totaled 324 yards of offense, with 221 through the air, and 103 on the ground, while the Scottie defense held the host Raiders to 128 yards of total offense.

Sands led the winners with his eye-popping five touchdowns, 70 yards rushing, and 68 yards receiving, while Fritter finished hitting seven of his 10 attempted passes for 185 yards and pair of scores as well.  Scottie second-string QB Drew Burkhart nailed five of his six attempted aerials for 33 yards, while Alex Williams and Kaden Bay topped Scottie pass catchers with three grabs apiece, followed by Keaton Williams and Ethan Jenkins with a pair of snares as well. 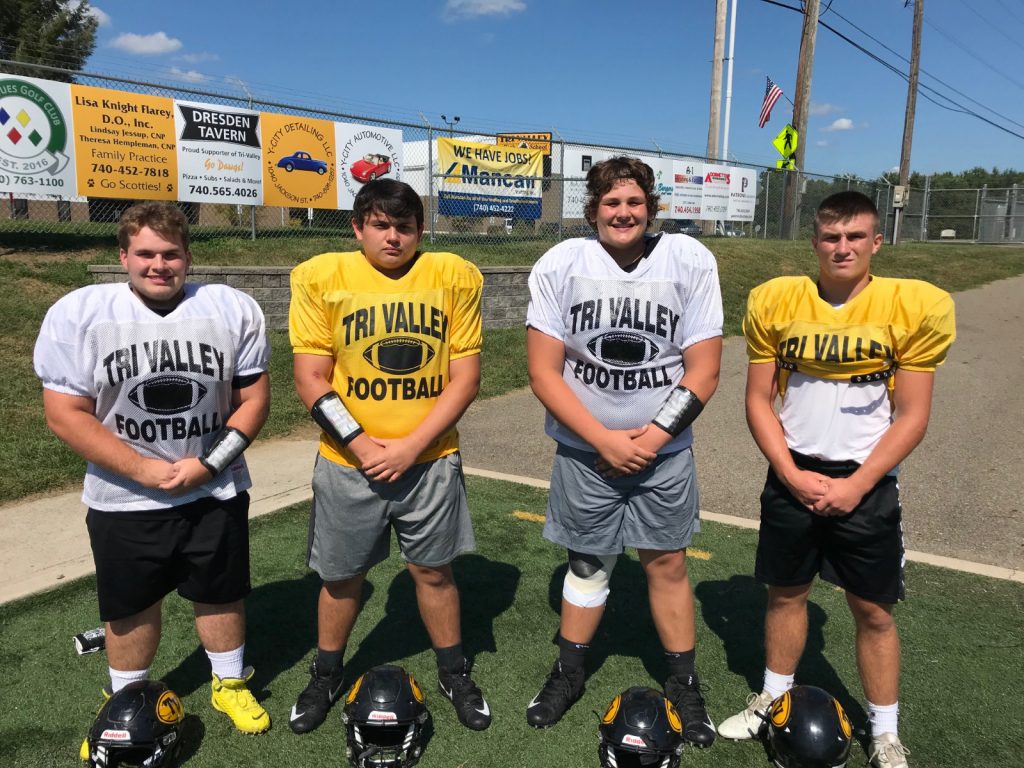 So now…… it’s time for the Blue Devils.

Tri-Valley owns a 4-2 series lead over Zanesville, in the heated – but still infant –  ‘backyard-battle’ gridiron rivalry, between the two neighboring ‘big schools’ that co-existed locally for over four decades before meeting on the gridiron for the first-time, back in 2013.

The Blue Devils manhandled the Dawgs in the two football powers initial hook-up – 52-7 – back in their first meeting at John D. Suslberger Memorial Stadium, in 2013.

Tri-Valley returned the favor the next year at Jack Anderson Stadium in ‘Round Two’ in Dresden, whipping Zanesville by a 35-0 lopsided score.

The 2015 TV vs ZHS battle was a true pigskin classic, as prep football purists left Suslberger Stadium nodding their heads in approval, after a gutty, hard-fought 10-7 Zanesville win over the black and gold.  What a rugged battle it was!

But for the past three years, the Scotties have owned bragging rights over their non-conference ‘neighbors-to-the-south’, with a 33-3 win in Dresden in 2016, a 42-7 conquest over the Blue Devils at ZHS in the Dawg’s never-to-be forgotten state title runnerup 2017 season, and last year’s 34-26 victory over the Chad Grandstaff-led ZHS pigskin contingent at Jack Anderson Stadium, in first-year coach Kevin Fell’s first go-round with the local ‘red-white-and blue’ ZHS gridironers.

So what’s in store for the ‘back-yard brawl’ in 2019?……  See for yourself, this Friday night, September 13….yes, Friday the 13th….. at Zanesviile’s esteemed John D. Sulsberger Memorial Stadium – a grand venue to watch high school football. (just like Jack Anderson Stadium)