The important victory atoned for the Scotties lone conference loss of their 2019 campaign, a 1-0 setback at the hands of West M. back on September 3 on the Tornadoes home field.

In a bizarre twist to the contest, the game was called with approximately 20 minutes left due to technical issues with the lights at Kenny Wolford Park; translated…. the lights went out!  Since more than half of the game was completed, it was considered a full game, and the Scotties were credited with the victory.

Offensively for the black and gold, Hayden Whitt’s penalty kick goal, and a score apiece from Dustin Watts and Gino Repuyan provided the winning 3-1 margin for the Scotties.

“Both teams played with a lot of energy and enthusiasm. The game was everything we had hoped for and expected; we worked hard and are happy with the result. I really can’t say enough about our boys. Yes it was senior night, and they stepped up, but every player who stepped on the field added something to the game that ultimately added to our success,” continued Coach Gibson.

Pictured below are the seven TV Scotties seniors who were honored and recognized – along with their parents – during a pre-game ceremony ahead of the TV vs West M. game.  Left to right are: Lucas Miller, Dustin Watts, Mason Dunn, Tyler McClellan, Brady Baker, Alex Huy, and Hayden Whit.  Special thanks to Kelly Long for the great TV boys soccer pics! 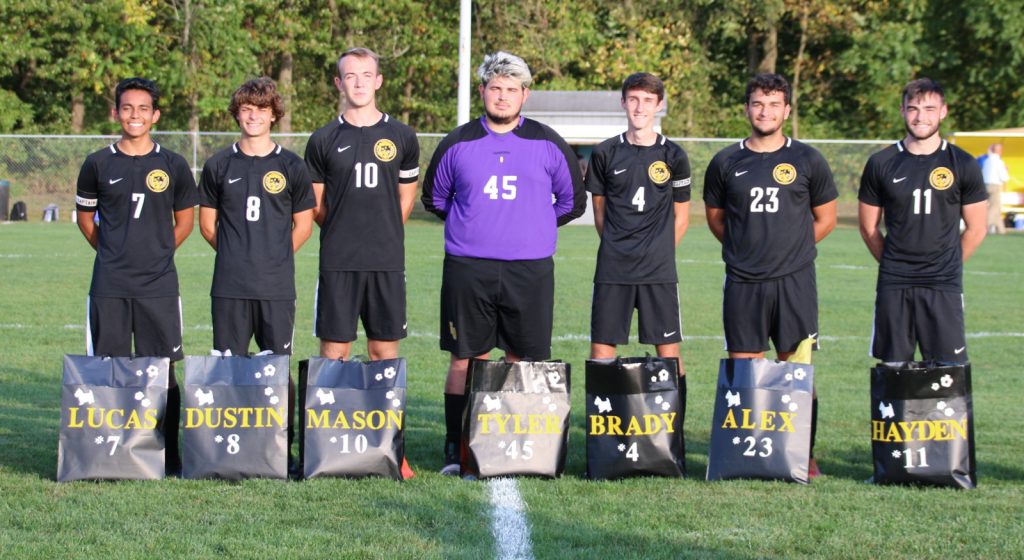