Friday night, October 4 at New Lexington, Tri-Valley rode the school-record seven touchdown performance of running back Blake Sands on their way to a 73-24 victory over the host Panthers.

The victory improves the Scotties record to 4-2 overall and 3-1 in Muskingum Valley League play.

The win sets up yet another big Tri-Valley vs Sheridan match-up, set for Friday, October 11 in Thornville.  The Generals are unbeaten in conference play so far in the 2019 season.

In the New Lexington victory, the visiting Scotties scored early and often, lighting up the Jim Rockwell Stadium scoreboard for 17 first quarter points, then an eye-popping 35 second period points for an improbable 52-18 halftime lead, ensuring a running clock to start the second half, then putting it in cruise control the rest of the way for the astounding 73-24 win.  For host New Lexington, it was the second week in a row that the Panthers saw ‘big numbers’ in a game, as the black and orange whipped Coshocton 82-60 back on September 27 on the Redskins home field.

Blake Sands remarkable game included 26 carries for 261 yards (a ten-yard per carry average) with six touchdowns on the ground, with an additional score coming on a second quarter 68-yard touchdown reception from quarterback Aiden Fritter.  The talented junior scored on runs of 30, 1, 64, 1, 59, and 16 yards.

Another talented Scottie junior – Jordan Pantaleo – was nearly as effective, churning up 146 yards on the ground on just 11 carries, and scoring on runs of 62 and five yards before exiting the game early with an injury.

Tri-Valley’s Zach Baker capped the TV scoring onslaught with his three-yard end zone visit with 2:09 left in the game, for the final 73-24 winning margin.  Scottie placekickers were perfect on the night, with Kaden Bay splitting the uprights on a 7-7 night, while Morgan Williamson notched a 35-yard field goal and pair of PATs as well; key to a perfect night for the Scottie kickers as well was the holder, Jalen Goins-Chandler, and long snapper, Karter Jones.  Great job fellas.

New Lexington speedster C.J. Ratliff paced the Panthers with two long kick-off returns – 93 and 98 yards –  for touchdowns; he also caught seven passes for 122 yards and one touchdown to lead New Lex, now 4-2 overall and 2-2 in MVL play.  Logyn Ratliff passed for 194 yards with a touchdown and two interceptions on 21-of-28 passing for the Panthers.

Defensively for the Scotties, Drew Richert, Gyle Bradshaw and Ben Reiss led the TV tacklers, with Richert snaring an interception as well.

Pictured below are the Players of the Week – picked by the coaching staff – based on their performance in  the Scottie’s Week 6, 73-24 victory over New Lexington.  Offensive Players of the Week: the entire TV offensive line, who opened up holes all night in the New Lex win, allowing Scottie rushers to roll up 446 yards on the ground, including 261 yards rushing by Blake Sands, and another 146 by Jordan Pantaleo.  Back row, left to right are:  Jacob Kinder, AJ Collins, Jake Priest, Kaden King, Seth Schneider, and Seth Tyson.  Pictured in the front row: (l-r)  Defensive Player of the Week, Drew Richert, and Zach Baker, JV Player of the Week. Congratulations fellas! 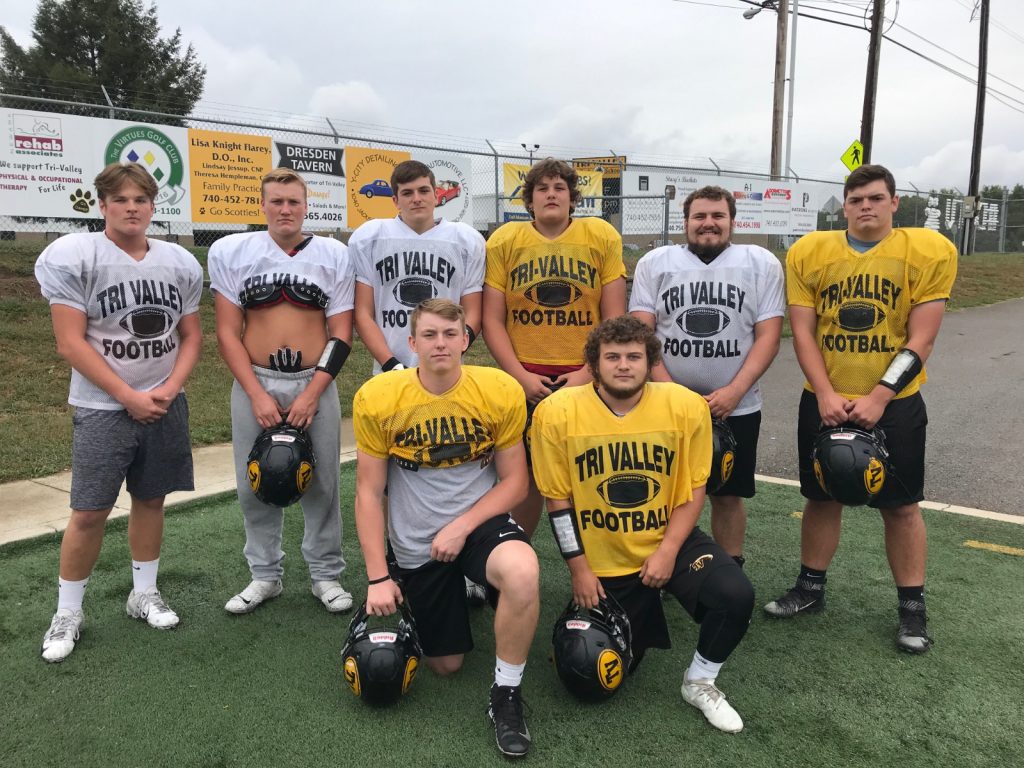