While ‘payback’ may have been on the minds of the Tri-Valley boys basketball team – heading into their Tuesday night, Feb 4 matchup with Maysville in Dresden – staying in the Muskingum Valley League race was what really mattered, as the Scotties and Panthers hooked up at The Dawg House for a late-season key conference match-up.

Trailing league-leading Sheridan by one game in the loss column, Coach Todd McLoughlin’s Scottie charges got the job done Tuesday night at The Dawg House – atoning for a ‘Round One’ loss to Maysville – defeating the visiting Panthers 63-56 in a tightly-contested battle of MVL rivals.

The win improved Tri-Valley’s overall mark to 14-5 on the 2019-20 season, and now 11-2 in conference play, with three league contests remaining.

Scottie senior standout Keaton Williams got his team off to a good start with five first frame points, with teammates Skye Bryan, and brothers Jack and Luke Lyall adding treys, as the home team hustled to a 14-11 lead at the first break.

Tri-Valley got a pair of three-point bombs from Bryan and sophomore starter Ty Smith in the second stanza, and four points from junior Jakob Frueh.  But the visiting Panthers outscored the host Scotties 14-10 in the period, and took a 25-24 lead into the halftime lockerroom.

The Dawgs used a balanced scoring effort in the third quarter to take back the lead from the Panthers, led by Bryan’s seven counters and five from Williams, as the black and gold edged ahead of Maysville, and led 41-39 heading into the fourth quarter.

Any hopes that the visiting Panthers had of sweeping the season series over the host Scotties were dashed in the final eight minutes of action – thanks to the talents of senior lefty Scottie standout Skye Bryan, who dominated play in the fourth quarter with 10 points, while teammate Jalen Goins-Chandler helped seal the deal as well with a six-for-six charity stripe performance down the stretch to give Tri-Valley the important 63-56 win. 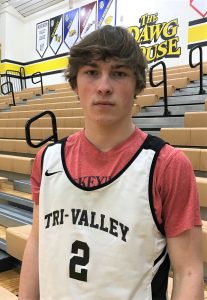 Coach Chris Garber’s TV junior varsity squad picked up a win in the reserve game as well, dispatching the visiting Maysville JV cagers by a 52-40 score.  Aaron Frueh’s 15 points led the way for the winners, with Jordan Pantaleo close behind with 12 counters.  Cade Searls’ 15 points were tops for the Panther JV team.

In the opening game of the basketball tripleheader at The Dawg House, Coach Davis Keel’s Scottie freshman team tipped off the evening in winning fashion with their 42-23 win over the Panther frosh squad.  Kaleb Lyons led TV with 17 points, with Jayden Walker adding nine, and Treyshawn Bintz eight for the winners.  Cole Roberts led Maysville with eight points.

This Friday night, February 7, the Scotties make the bus trip south to Perry County for yet another late-season, key Muskingum Valley League contest, when they land in Crooksville for a date with the Ceramics.

The Scotties defeated Crooksville 85-57 back on Dec. 20 in Dresden at The Dawg House, powered by Skye Bryan’s 27-point night.  Rest assured however, the Ceramics will not be taken lightly by Coach Todd McLoughlin’s charges, with Crooksville’s Tuesday night 63-48 win over New Lexington proof that the ‘red and black’ can play, backed up further by their current 7-6 record in Muskingum Valley League action.