Call them ‘bookend basketball titles’ — for their high school careers.

Tri-Valley senior basketball standouts Kyndal Howe, Lauren King, and Audrey Spiker have been an integral part of the Lady Dawgs success since their freshman year, when they hit the varsity hardwood running, helping their team to a share of the 2016-17 Muskingum Valley League title and a near OHSAA D-II final four appearance.

Fast forward four years – and the three have done it again.

With a share of the 2019-20 MVL girls basketball title in the balance – on Saturday night February 8 – Coach Kurt Kaufman’s Tri-Valley squad faced a tough task, tipping it off with a strong Maysville team in South Zanesville with a share of the trophy obtainable with a win.

For four quarters, the two conference stalwarts battled it out, but when the dust had settled, the Lady Dawgs came out on top, by a 54-45 count, securing Tri-Valley girls basketball its 17th MVL title in school history.

But it wasn’t easy, as the host Lady Panthers jumped out to a 12-11 lead at the first break, led by Alexis Samson with five points and fielders from Averee Vaughn, Bailee Smith and Macie Jarrett.

Lady Dawg seniors Kyndal Howe and Lauren King popped in a pair of treys for Tri-Valley’s first points of the contest for a quick 6-2 TV lead, but the host Lady Panthers then ran off nine straight points for an 11-6 lead near the end of the first frame, before Howe’s traditional three-point play closed the gap to 11-9 with 39 seconds remaining.  After a Maysville free throw, TV got a last second rebound bucket from high-scoring Riley Tracy, as the two teams headed to the second quarter separated by just a point.

The Lady Dawgs caught fire in the second stanza, scoring on nine of their 15 possessions, outscoring the hosts 18-5 to grab the momentum and big 29-17 lead headed to the halftime lockerroom.

Tracy heated up the TV offense in the second stanza, striking for nine points, while freshman Lexi Howe contributed a pair of athletic drives to the hoop for four points, senior Audrey Spiker a lay-up off a nice Tracy assist, then senior Lauren King a late first-half trey that banked off the glass and through the nets.

Jarrett’s five counters were the only points the hosts mustered in the second quarter, as the Lady Dawgs turned up the defense a notch to get the double-digit lead at intermission.

Kyndal Howe’s rebound bucket to start the second half padded the TV lead, before Maysville went on a 7-0 run to trim the lead to 31-24 at the third quarter five-minute mark.

But a pair of Tracy charity tosses and another Lexi Howe fielder stemmed the tide for the black and gold, then the visiting Lady Dawgs closed the third quarter with an 8-3 burst, thanks to a pair of loose ball lay-ups from hustling Anna Krupa, another Tracy counter, and a coast-to-coast lay-up from Kyndal Howe, as the Lady Dawgs seized control of the big regular season finale, taking a 43-28 lead into the fourth quarter.

As expected, Maysville was forced to foul in the fourth quarter, and while the Lady Dawgs connected on only five of their attempted 13 charity tosses, their defense – and fourth frame fielders from Janie McLoughlin, Audrey Spiker and Lauren King – were enough to get the job done for the final 54-45 tally.

Riley Tracy was a force in the Maysville win, as her 17 points, 11 rebounds, four blocks and four steals were tops for the Lady Dawgs, who also got 10 points from Kyndal Howe, and nine from Lauren King.  Bailee Smith’s 17 and Macie Jarrett’s 15 points were high for Maysville.

Coach Logan Scott’s junior varsity squad made their final outing of the 2019-20 season a good one, defeating the host Maysville reserve team by a 40-34 count in the JV game.  Ashley Dinan’s 13 points led the winners, who also got 10 from hustling Hannah King.  Coach Scott’s Lady Dawg charges finished their 2019-20 season with a solid 15-7 overall record, and a 12-2 mark in Muskingum Valley League play.  They also finished the year on a 10-game winning streak.  Congratulations, TV JVs!

And now it’s on to the post season for Coach Kurt Kaufman’s MVL champs.

The Lady Dawgs earned the top seed in their D-II East District bracket draw, and hop on the tournament trail on Saturday afternoon, February 15, when the tip it off with 17th-seeded Carrollton at 2:00 p.m. in Dresden at The Dawg House.

As of this posting, presale tickets are available for the public, and will be on sale at the TVHS office this week, Tuesday through Friday during regular school hours.  Pre-sale tickets are $6; tickets purchased at the door on game day are $7.  For every pre-sale ticket sold at the school, the TVHS athletic department will receive $2.

Get your tickets early for the game, and Go Lady Dawgs! 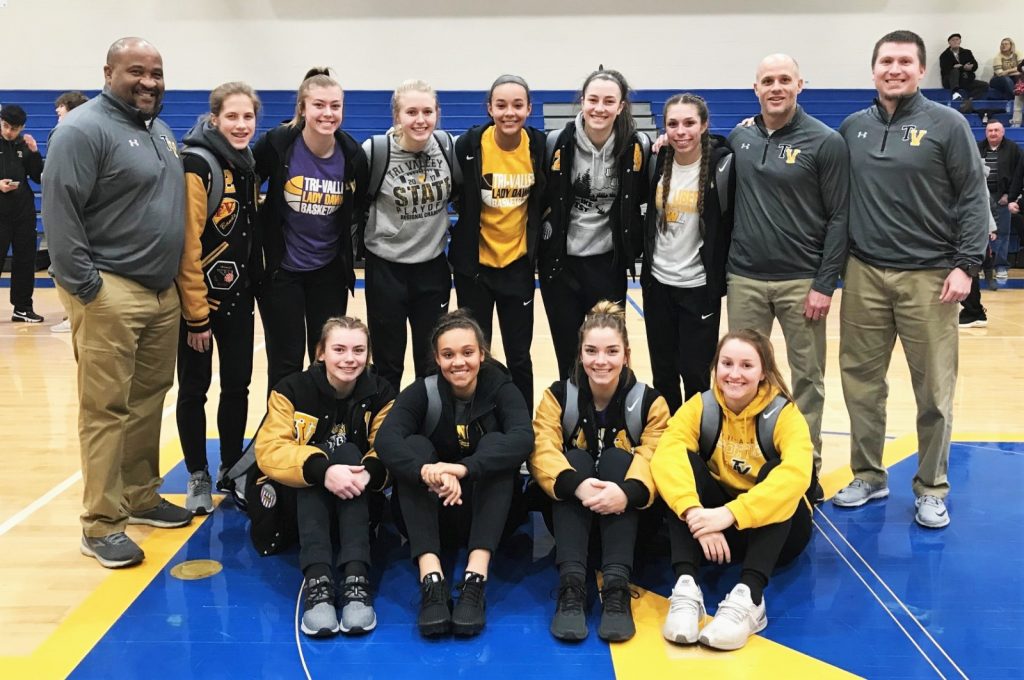