Heading into the fourth quarter of Tuesday night’s D-II Regional semi-final against fellow MVL co-champ Sheridan at Zanesville’s jam-packed Winland Memorial Gymnasium, the odds seemed stacked against any kind of a Tri-Valley comeback for a win.

Faced with a nine-point deficit, – and without the services of senior standout and four-year starter Kyndal Howe due to injury – it seemed that a hoped-for spot in the Regional championship game wasn’t in the cards for Coach Kurt Kaufman’s TV girls basketball squad.

But after a game-long struggle to ‘find their groove’, the Lady Dawgs persevered, outscoring Sheridan 21-10 in the decisive fourth quarter, and rallying for a pulsating 50-48 win in a Regional semi-final contest played before a sell-out crowd at what is arguably one of the finest “March Madness’ high school hoops venues – and atmospheres – in the state, ZHS’s Winland Memorial Gymnasium.

The huge comeback win advances Tri-Valley to the Friday night, March 6, D-II Regional title game vs. the top Division II team in the state, the 27-0 Circleville Lady Tigers, who dispatched Lakewood 61-41 in the evening’s first Regional semi-final at ZHS.  Tip-off for the TV vs Circleville Regional title battle back at Winland Memorial Gym – with a state final four berth on the line – is set for 7:00 p.m.

In the Sheridan win, the Lady Generals jumped out to a quick 5-0 lead on an Aubrey White layup and Kendyl Mick three-point bomb.  The Lady Dawgs got on the board with a Riley Tracy lay-up, then a Lauren King steal and coast-to-coast lay-in, but SHS’s Mick came back with another trey and a charity toss for a 9-4 lead.  Tri-Valley freshman standout Lexi Howe drove the lane in the first frame’s final seconds and banked in a counter, as the two Muskingum Valley League heavyweights went to the bench at the first break separated by three points, with the Lady Generals up 9-6.

Lexi Howe got the Lady Dawgs off to a good start in the second stanza with another drive to the hoop for two, but Sheridan’s Grace Conrad then scored four straight for a 13-8 SHS lead.  That five-point cushion would remain the rest of the quarter for the Lady Generals, as the two conference rivals punched and counter-punched right up to the halftime intermission, with Sheridan jogging to the locker room with a 23-18 lead.  Tri-Valley got a second-quarter Janie McLoughlin loose ball put-back for two, an Anna Krupa lay-up off a nice Audrey Spiker steal and assist, then a Lauren King lane floater that swished the nets and cut the SHS lead to 17-15 at 3:34 before halftime.  McLoughlin added a charity toss, then Krupa a rebound hustle put-back that got her team within one at 19-18 at 1:31.  But a pair of Faith Stinson buckets – the latter just ahead of the buzzer – saw the Lady Generals march to a momentum-gaining 23-18 lead at intermission.

Third-quarter action in the nerve-wracking affair saw Sheridan maintain their momentum – and add to their lead – outscoring the Lady Dawgs 15-11 to take a 38-29 lead into the fourth quarter.  All Tri-Valley had to show for their first six possessions of the second half was a Riley Tracy trey – but the headsy junior’s wing jumper and three straight points from senior leader Audrey Spiker, followed by a Lexi Howe banked-in jumper from the wing, kept the black and gold within striking distance heading into the final period of regulation play and one of the most exciting eight minutes of Lady Dawg basketball in quite some time.

A Lexi Howe free throw was the first fourth-frame scorebook entry for the Lady Dawgs, followed by a next-possession Audrey Spiker drive to the hoop for two that brought the black and gold within six points at 38-32.  But the Lady Dawgs came up empty from the field on their next six possessions – managing just three Tracy charity tosses and a Lexi Howe front end of a one-and-one foul line chance, as Sheridan still owned a 43-36 with 4:38 left in the contest.

But that’s when the Lady Dawgs finally found their groove – on offense and defense.

A Lauren King lay-up ignited a game-turning – and deciding – 10-0 Tri-Valley run.  Tracy followed up King’s counters with three straight points, then Audrey Spiker corralled in a nice Anna Krupa feed to the rim for a lay-up that brought the black-and-gold even with Sheridan for the first time in the contest at 43-43 at the 3:03 mark of the fourth quarter.

Sheridan came up empty on a long offensive possession, then TV’s freshman phenom – Lexi Howe – was the benefactor of an Audrey Spiker offensive rebound that eventually found the talented Howe’s hands, as she lofted a beauty of a jumper from behind the arc that swished through the nets, giving the Lady Dawgs their first lead of the night, and blowing the roof off of Winland Memorial Gymnasium on the Tri-Valley side with just 1:57 remaining.

Sheridan countered with a pair of free throws to cut the TV lead to one, but Lauren King broke loose on a fast break with a lay-up for a 48-45 lead.  Back came the Lady Generals again with a bucket, but a Riley Tracy fielder with 22 seconds left sealed the deal for the winners, as a Kendyl Mick final-second drive to the hoop trying to draw a foul was off the mark, giving the gals from TVHS one of the most hard-earned victories in school history, and leaving them just one win away from a trip to the Big Dance – a final four appearance next weekend in Columbus at venerable St. Johns Arena on the OSU campus.

Coach Kurt Kaufman stated in his post-game comments to the media that “you need a little toughness and grit in games like this.”

And in this game, the Lady Dawgs had a lot of both.

Riley Tracy led the winning Lady Dawgs with 15 points, with Lexi Howe’s 11 counters right behind, followed by important eight-point performances from Audrey Spiker and Lauren King, and key first-half offensive efforts from sophomores Janie McLoughlin and Anna Krupa, who combined for seven points in the second quarter to help keep the struggling Lady Dawgs in the game.

Kendyl Mick and Faith Stinson led Sheridan – who finished their season with a sterling 23-3 record –  with 14 points each, with Grace Conrad adding eight, and Bailey Beckstadt seven for the Lady Generals, who – like the Lady Dawgs – will graduate four senior contributors.  Mick also became the school’s all-time leading scorer after her 14-point prep finale.

So now it’s on to Friday night’s ‘Elite Eight’ contest, with the Lady Dawgs vs. top-ranked Circleville playing for a final four appearance.  Tri-Valley last played in a Regional title game back in 2017, when they were defeated by Miami Trace, 30-28.

The Lady Tigers of Circleville and Lady Dawgs are no strangers – having met in the regular season back on Dec. 27 in a non-conference holiday tournament game played at Pickerington Central High School.  The Lady Tigers prevailed in that contest – 50-41 – in a game that Circleville led at every break and saw the Lady Dawgs post just one double-figure scorer (Lauren King’s team-high 10 points) and make a minuscule two trips to the foul line as a team – sinking just one charity toss on the night.  Jaylah Captain’s game-high 17 points led Circleville, who also got 12 counters from Tori Bircher. In Circleville’s Tuesday night Regional semi-final win over Lakewood, the Lady Tigers benefitted from the play of two other standouts – twin towers Kenzie McConnell (6’0”) and Meghan Davis (6’1”) who accounted for 41 of their team’s 61 points in the win.

The Lady Dawgs will have their hands full, for sure.  But never – ever – count them out…… just ask the Sheridan Lady Generals. 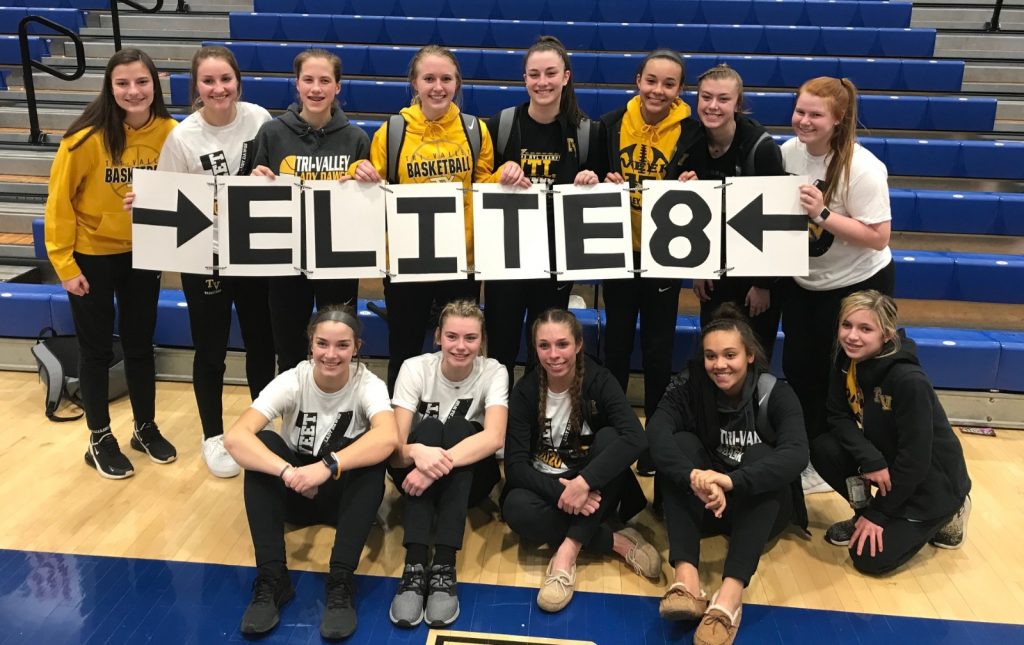