Friday night, March 6 at Zanesville High School’s Winland Memorial Gymnasium – Coach Kurt Kaufman’s 2019-20 Tri-Valley Lady Dawgs etched their names forever into the annals of their school’s girls’ basketball history books, becoming the fifth TV team to reach the OHSAA final four plateau, with a second straight post-season thriller – this one a nail-biting 45-43 overtime win over the Circleville Lady Tigers, that punched their ticket to Columbus and a shot at TVHS’s first team title in any sport in their 54-year existence.

The Tri-Valley Lady Dawgs will play (for the second straight game) another unbeaten team – 27-0 Napoleon – in the final four state semi-final game on Thursday, March 12 at 3:00 p.m at St John Arena in Columbus.  The Lady Wildcats of Napoleon punched their ticket to their school’s first girls basketball final four visit with their 54-37 win over Willard in their Regional title game.

But – along the identical lines of their pulsating 50-48 win over Sheridan in their Tuesday night, Mar. 3 semi-final game at ZHS – it was anything but easy.

In the Regional tile contest – played before a rowdy sell-out crowd at ZHS – the Lady Dawgs survived a slow start and – powered by the return to the line-up of injured senior Kyndal Howe, and the standout play of her freshman sister, Lexi, – earned  Tri-Valley its first Regional Girls basketball title since 2005, when then Coach Marty Bice’s Lady Dawg squad – led by TVHS Athletic Hall of Famer Tricia Smith – defeated rival River View 58-42 at ZHS to ‘advance to the dance’ where they would eventually fall to Columbus Eastmoor 59-48 in the Final Four semi-final tilt.

The Friday night, March 6, ‘Elite 8’ Regional title clash with No. 1 state-ranked Circleville was a battle of attrition for both teams, as the offenses struggled, but the defenses shone.

Circleville jumped on the Lady Dawgs from the opening tip, racing out to a quick 6-0 lead on a pair of buckets in the post from 6’1” standout Kenzie McConnell and a nifty – and tricky – in-bounds play from point guard Brice Kendrick.  Tri-Valley managed just a pair of first frame charity tosses from Riley Tracy, then Lexi Howe, and trailed 8-4 at the first break.  (The Lady Dawgs, however, had an ace up their sleeve, with the return of senior standout Kyndal Howe to the line-up.  Howe missed the Sheridan semi-final win, but turned in a gutsy performance against the Lady Tigers and proved an inspiration to the team.)

Things got no better in the first few minutes of the second stanza for the Lady Dawgs, as a Tori Butcher trey and McConnell free throw had the Lady Tigers up 12-4 at 6:06 of the second quarter.

But that’s when Tri-Valley snapped out of their offensive doldrums, outscoring Circleville 16-5 the rest of the period to take a 20-17 into the halftime lockerroom.

Lady Dawg sophomore starter Janie McLoughlin started the comeback – and run – with two free throws, followed by a key Lauren King three-point bomb, then a Lexi How lane jumper at 3:32 of the second period that capped a 6-0 ‘mini’ TV run to cut the deficit to 12-11.  Circleville’s McConnell sandwiched a two-pointer and pair of charity tosses around two Lexi Howe free throws for a 16-13 Lady Tiger lead, but the Lady Dawgs countered with five straight from Kyndal Howe (two free throws and a trey) giving Tri-Valley its first lead of the contest at 18-16 with 1:16 left in the first half.  The Lady Dawgs ran the clock on their last-second stanza possession to perfection, getting a Lauren King lay-up to send the black and gold to the intermission with their 20-17 advantage over the stunned lady Tigers.

Circleville’s undefeated Lady Tigers – and their large contingent of fans – were even more shell-shocked in the third quarter, as the fired-up Lady Dawgs scored on five of their first nine second-half possessions to take a 31-18 lead.  Riley Tracy ignited the hot second-half start for TV with a long trey from the right corner, followed by a Lexi Howe drive to the bucket, an Audrey Spiker steal and lay-up, a Riley rebound bucket, then another Lexi Howe dribble-drive through the paint at 2:39 of the third period that gave the black and gold their 13-point cushion.

Circleville rallied, however, finishing the quarter with a 6-0 run of their own, on the strength of a Jaylah Captain trey and three more McConnell counters, but the Lady Dawgs still led 31-24 heading into the fourth quarter of what would resemble the 15th round of a heavyweight prizefight.

Yet another Lexi Howe drive through the lane for two points gave the Lady Dawgs a 33-24 lead on their first fourth frame possession, but the Lady Tigers then rallied with five straight from Kenzie McConnell, then a Meghan Davis free throw that saw the Lady Tigers down by three at 33-30 with 3:43 left – in regulation.

A pair of Lexi Howe charity tosses pushed the TV lead back up to 35-30 at the 2:27 mark, but that’s when things got interesting, as Circleville employed the ‘you’re gonna’ have to beat us from the foul line’ strategy to perfection, as the Lady Dawgs netted only three of their ten attempted charity tosses in the final two minutes of regulation, enabling the Lady Tigers to play catch-up on the strength of a pair of Jaylah Captain three-point bombs and two McConnell free throws, to tie the contest at 38-38.  Both teams avoided disaster at the end of regulation, as a loose ball fought for on the floor was deemed by the officials to have occurred after the buzzer had sounded, forcing overtime to decide a Regional championship and trip to the Final Four.

In the extra session, the Lady Dawgs fared much better at the foul line, netting seven of eight charity tosses attempted, with the final two free throws by Lexi Howe proving to be the game-winners with four seconds remaining in the first overtime, for the final 45-43 winning margin.  The Lady Tigers Kenzie McConnell’s last-second drive to the rim and final shot was off the mark, as the Tri-Valley student section stormed the court and swarmed around the Regional champ Lady Dawgs. 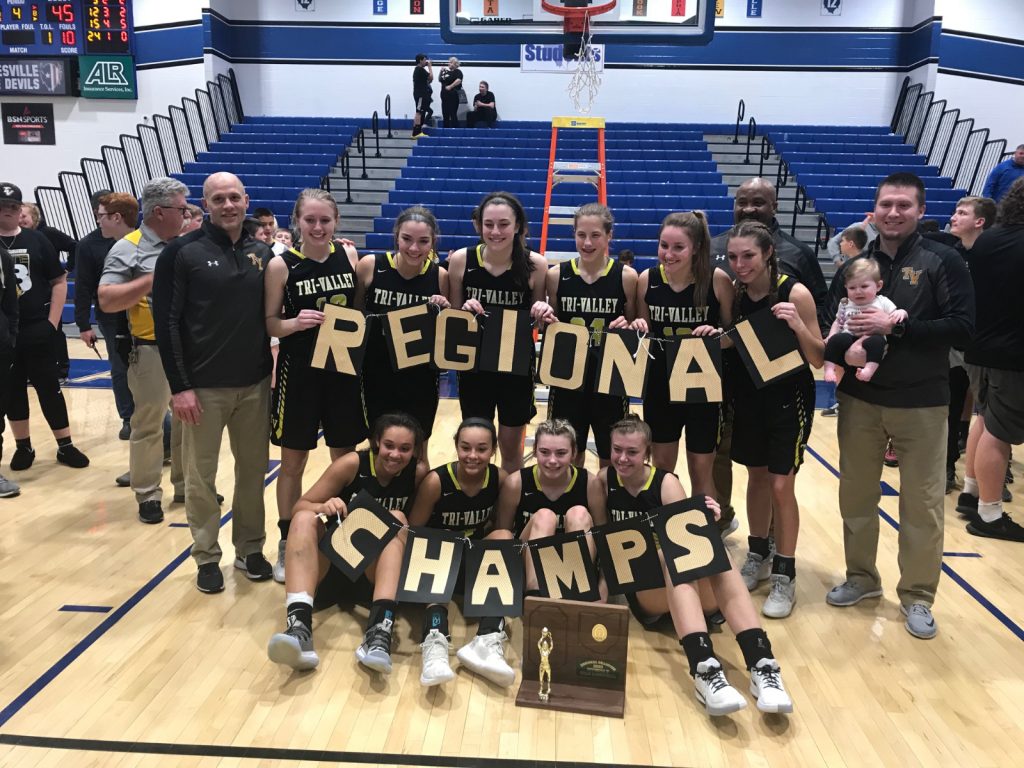