The Tri-Valley wrestling team was well-represented last weekend at the Claymont OHSAA D-II District Meet, with seven Scottie matmen competing for a top-four place that would qualify them for a State Meet berth this weekend in Columbus at the Schottenstein Center.

Three of those grapplers – junior Joseph Eckelberry and seniors Dylan Hines and A.J. Collins, punched their ticket to the State Meet with top four places, while another – sophomore Isaiah Armstrong – just missed with a fifth-place finish but will head to OSU with his three teammates as an alternate.

Following is TVHS wrestling coach Jon Hardman’s thoughts and words about the District Meet – and this weekend’s State Meet:

“The boys did a great job at Claymont this past weekend. We had several wrestlers win matches and fall just short of placing. The wrestlers who placed, had to overcome some tough competition.

126 – Joseph Eckelberry – Joseph had a great District tournament. He had to wrestle his cousin from Sheridan (Michael Eckelberry) in the first round. Those two are very close and have grown up wrestling each other. They had never wrestled in a match before this. Joseph shook off the jitters and pinned Michael in the 1st period. He then ran into a very tough Brandon Brown (Carrollton). Brown, like Eckelberry, qualified for state as a freshman and was an alternate as a sophomore. Eckelberry was ahead in the 3rd period, when Brown blew his knee out on a scramble. Brown could not continue the match. To get to the finals, Joseph then had to best Kendel Weber (West Holmes). Weber defeated Eckelberry in overtime the week before. Joseph did not let this happen again, as he pinned Weber in :50 this time around. Joseph fell 6-0 in the finals against Koen Kish (St. Clairsville), but his ticket to Columbus had already been punched. Eckelberry will face Nathan Demangeont from Peninsula Woodridge in the first round on Friday. Of special note: With Eckelberry’s pin over Weber, he broke the school pin record (33) with 34 on the season. Eckelberry broke coach Austin Jones’ pin record as a freshman. He then broke his own record as a sophomore. To do this for the 3rd year in a row is an impressive feat and shows that making it 6:00 on the mat with Eckelberry is an unlikely scenario for opponents.

182 – Dylan Hines – Hines was a success story a year ago, exploding on to the scene with 47 wins on the year. The only issue with last season, was Hines peaked too early in the season. He fell one match shy from qualifying. This season, Hines ran into some very good wrestlers. He took several losses early in the year and had to overcome the emotional/mental struggles that come with performing under expectations. These past two weekends, Hines has found his stride, peaking at the perfect time. Hines opened up with a decision over Jeff King (Fairfield Union) before falling by decision to Anthony Parks (Jackson). Dylan bested a tough Bill Wallace (Athens), setting up a showdown with David Harper (Philo). Harper won a dominant MVL finals match over Hines and defeated Hines again the following week at Sectionals (3-2). Hines came out and wrestled well this time around. The match went into overtime as it was all tied up. Hines not only scored the final takedown to clinch the victory, but he went on to score the pin on top of it. This was a very emotional win, as Hines has fallen to Harper twice. Hines’ “blood round” match result was a one-sided victory over Dylan Moore (Washington Court House). Hines fell in the 3rd/4th place match to returning state placer, David Tuttle (Steubenville). Dylan will open up with Justin Mayes (Bellevue) on Friday.

220 – AJ Collins – Senior captain AJ Collins entered the District tournament as our highest placer from Sectionals (2nd). On this day though, AJ was battling flu symptoms that had kept him in bed for most of the previous two days. Collins pushed through on Friday, winning his first two matches against Myles Clark (Claymont) and Jonathon Vanover (Vinton County) to reach the semifinals. Collins then lost a grueling 5-3 match against Kade Rawlings (Greenfield McClain). This was a very emotional loss because it was determined by referee calls instead of points scored. AJ did a good job of keeping his emotions in check on the match, but once off, he was devastated. Those losses are the toughest to take because they are based on the opinion of who is working harder to score. There are several variables in those decisions, but AJ still had to win another match to qualify. He refocused and faced a familiar opponent in Myles Clark (Claymont). Clark had lost to AJ in the first round, but battled all the way back to reach the “blood round.”  AJ won a 3-1 decision. Collins lost his 3rd/4th place match to Derek Witsberger (St. Clairsville), but the emotions of the day and stress from illness had taken it’s toll by that point. AJ showed why he is the leader of this team by pushing through adversity once again and achieving his goal for the weekend. Collins will face projected state champion Nolan Neves (St. Paris Graham) in the first round Friday.

138 – Isaiah Armstrong (Alternate) – Sophomore Isaiah Armstrong had a District tournament with some ups and downs. He came off strong, winning his first two matches against Ryan Mau (Hillsboro) and Zavier Campsey (Athens). In the semifinals, Isaiah fell to returning state placer, Tyler Muldrew (Steubenville) 10-2. In the “goto” match (the match that determines if a competitor qualifies for state), nerves got the best of Isaiah, as he fell 4-0 to Storm Duffy (Miami Trace). This being Isaiah’s first district tournament, he had a lot of pressure on him to get out. The consolation semifinals are often referred to as the “blood round” because competitors often wrestle with everything they have left, attempting to make it to state. It’s an emotional round of the tournament. Isaiah’s final match of the tournament was for 5th/6th place. This is the alternate spot, used to replace a wrestler who doesn’t make weight, gets scratched due to skin issues, or suffers an injury the week of. Several alternates got into the tournament last year. Armstrong faced off against a very tough Domanick Speelman (Carrollton). Speelman is a very good wrestler and fell victim to a tough draw in the bracket. With no pressure left on him, Armstrong was able to show his talent and defeated Speelman in :56. Hopefully, Isaiah gets a chance to continue this weekend in Columbus.

“Tri-Valley finished in 9th place out of 38 teams,” stated Coach Hardman.  “It was a respectable showing and several wrestlers contributed, only to fall short of the podium. Andy Hill and Tyler Crawford both fell one match short of placing. Alex Niner and Seth Schneider both lost two close matches to get eliminated. Tri-Valley showed that they can compete with the best teams this past weekend. Friday through Sunday in Columbus, the boys will attempt to prove it one more time as they battle for glory and look to bring a state championship back to Dresden.,” concluded Coach Hardman. 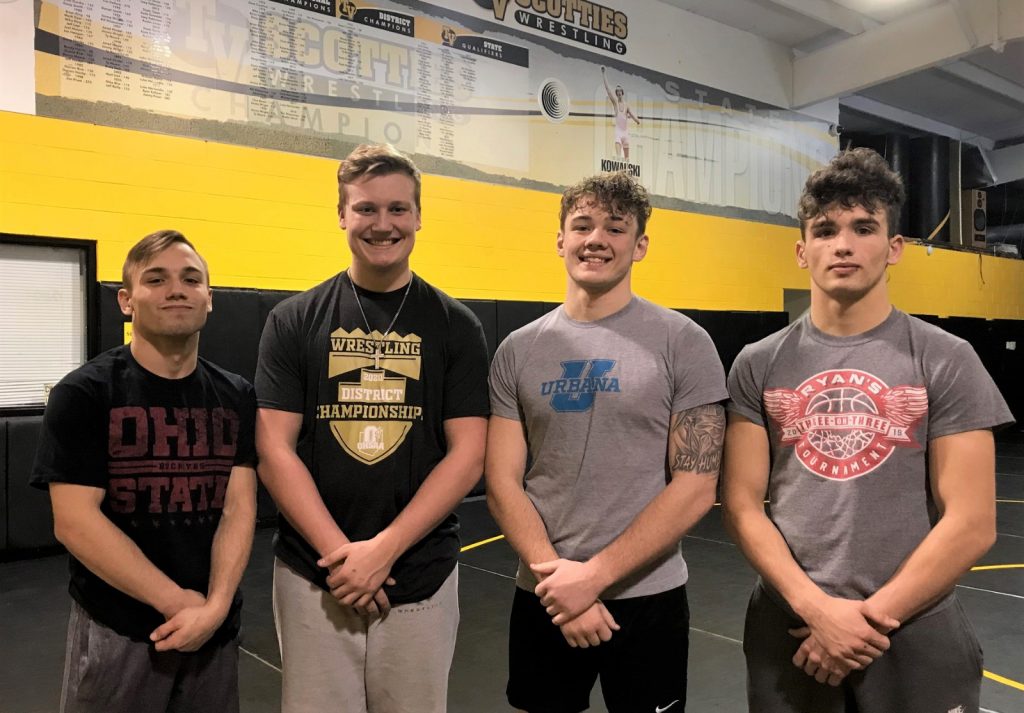 Scrimmage
10:00 am
View All Events