Tri-Valley football first-year coach Cam West’s Scottie defense dominated play from start to finish in their OHSAA state playoff opener – and the offense put up 50 points on the scoreboard through three-quarters of play – to help earn the Dawgs a shutout victory over an outmanned Columbus Centennial Stars gridiron squad Friday night, Oct. 9 in Dresden at Jack Anderson Stadium.

The Centennial victory was a defensive gem for the Dawgs, who not only did not allow a first down for the entire contest for the visiting Stars, but held them to negative yards in the total offense department as well.

The Scotties jumped out to a quick 21-0 first-quarter lead over Centennial on the strength of an 18-yard Jordan Pantaleo sprint to paydirt, an 11-yard scoring burst from fellow senior Blake Sands, then a 16-yard scoring strike from Scottie QB Aidan Fritter to Luke Lyall. (The Dawg’s only pass completion of the game.)

After the Tri-Valley defense recorded a safety on the Stars at the beginning of the second quarter, Fritter tacked on a pair of short QB keeper end zone visits, then Sands powered his way into the end zone from one-yard out for a commanding 44-0 advantage for the home team heading into the short halftime break.  Coleson McCullough split the uprights for PATs on the first four Scottie scores, then David Coleman tried his hand at one-point boots, successfully connecting for a pair of PATs to cap first-half scoring.

Scottie backup quarterback Drew Burkhart showed some good moves on a late third-quarter scoring keeper from 20 yards out, as Coleman’s final PAT accounted for the final 50-0 score on the home team’s new scoreboard.

As previously stated, so dominant was the Scottie defense, that Centennial ended up with negative yards (-34) in the total yards category without notching a first down, while the black and gold offense amassed 315 yards of offense on the Stars.

Now…. It’s time for second-round OHSAA state playoff action, as the Scotties prep this week to tackle a most formidable foe – the Jackson Ironman, where a two-hour bus ride will land the gridiron Dawgs right in the middle of Ironman Country — and their gem of a football venue, the 6,000 seat Alumni Stadium.

Jackson High School is located 40 miles southwest of Athens. The 5-1 Ironmen (who earned a first-round bye in Week 1 of the post-season) play out of the Frontier Athletic Conference and have just one blemish on their 2020 schedule – a Week 1, 30-27 overtime loss to Chillicothe (on a 42-yard field goal)  while walloping their other five opponents (Hillsboro, Miami Trace, Washington Courthouse, McClain, and Logan) by a combined 267-69 point difference.

Scottie Coach Cam West offers the following about the Jackson Ironmen:  “Jackson will be a tough opponent for us in the second round of the playoffs,” states West.  “They are an established football program and a well-disciplined team with some college prospects, a power running game, and some recent success in the postseason.”

“Playing them on their home field will be an advantage for them for sure — but we are preparing, and looking forward to the challenge,” concludes Coach West.

(And speaking of home field, will be this be the final time (below) that the Scottie football seniors will feel the Jack Anderson Stadium turf beneath their feet?  Stay tuned TV pigskin fans, as playoff losses by Tri-Valley and Zanesville in the coming weeks could have the Scotties and Blue Devils keeping the pads on, and facing off in Dresden at the end of the month in what will be deemed as the ‘regular season’ finale.  Sure want the Dawgs to stay on the tourney trail, but if not, what a way to cap a crazy season, right?  Stay tuned folks.)  Logan Scott photo 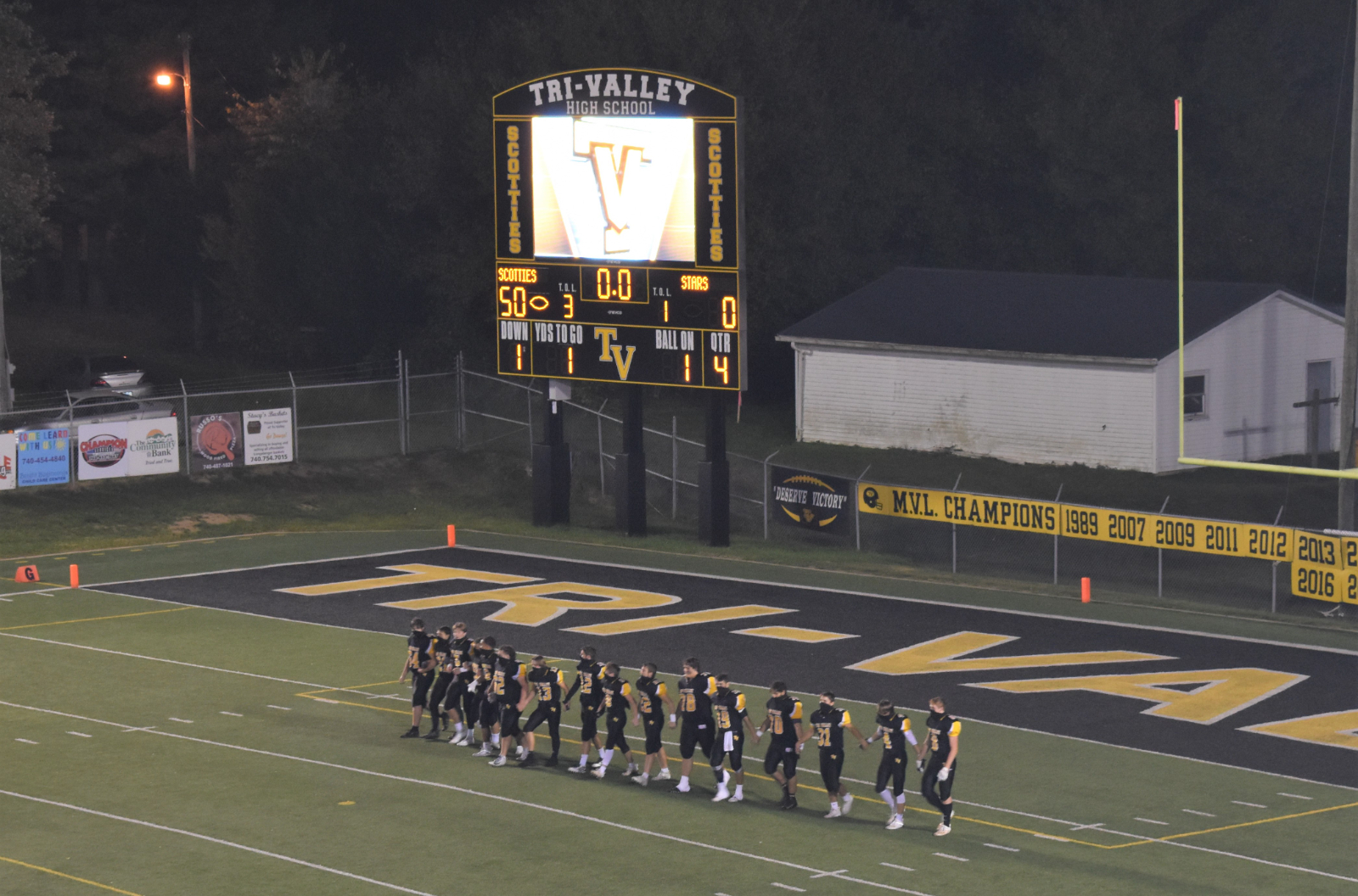