The victory hiked the Lady Dawgs 2020-21 season record to 8-2 overall, while still holding steady with a 4-1 mark in Muskingum Valley League action.

The year 2020 will always be remembered as the ‘What If’ year for TVHS Lady Dawg basketball, who’s 2019-20 championship hoops season and Final Four appearance in Columbus at OSU’s St John Arena back on March 12, (see below) was cut short by the COVID-19 national pandemic and ensuing nation-wide shutdown – just minutes before they were to take the floor in their D-II state semi-final contest vs. Napoleon.

And that’s just exactly what Coach Kaufman’s hustling Lady Dawg charges did, holding off a determined effort from a Dublin Jerome girls basketball team making their first-ever trip to Dresden and The Dawg House.

Wednesday night’s 43-40 Tri-Valley win over the competitive Lady Celtics (pronounced ‘Keltics’) was a nip-and-tuck affair, as the two teams ended the first eight-minute session knotted at 13-13, with Dublin Jerome holding the upper hand at halftime, jogging to intermission with a 20-19 edge over the host Lady Dawgs.

The Lady Celtics still carried the lead – 35-34 – heading into the fourth quarter, before a well-known staple of Tri-Valley basketball – DEFENSE – came to the forefront, as the Lady Dawgs outscored/outlasted Dublin Jerome by a 9-5 count in the final eight-minute session – and withstood a last-second game-tying three-pointer – to earn the 43-40 win.

“I was proud of the girls for their tough effort tonight defensively,” said an appreciative Coach Kaufman.

“On a night where we struggled shooting, we were able to rely on our defense to help us prevail – including a key stop to end the game!”

Tri-Valley senior standout scorer Riley Tracy led the home team’s effort in the first frame, connecting for a two-point fielder, a long looped-in trey, and two free throws for seven points, while super sophomore Lexi Howe added a pair of netters for four points, and junior hustler Janie McLoughlin a counter from close range that all added up to 13 points – which was matched by the visiting Lady Celtics, who got a pair of banked-in long-loopers from behind the arc from Ali Ford, a trey from Amaris Lowery, and fielders from starters Lisa Kuhlman and Paige Wlehkinski, as the two teams entered the second session of play tied at 13-13.

The Lady Dawg offense hit the skids in the second session, managing just an Anna Krupa three-point field goal, a pair of charity tosses from Lexi Howe, and a single free throw from freshman Eva Dittmar — as their minimal 19-point tally on the home scoreboard was actually just one less than the second period total from the visiting Lady Celtics, who got another trey from Ali Ford, a Kadence Conley fielder, and another Paige Wlehkinski netter that saw the visitors up by a slim 20-19 edge at the halftime intermission.

Third-quarter action saw both teams find their offense, as the home team Lady Dawgs got a trey and seven points from scoring leader Howe, fielders from freshman sparkplug Karlee Rose and post-points from Tailor Dupler, and a four-for six charity stripe performance from Riley Tracy, as the hosts parlayed a 15-point third-quarter into a 34-point total heading into the fourth quarter.

The only problem was that the Lady Celtics refused to fold on the enemy floor, getting nine third-quarter points from the tall and talented Amaris Lowery, on a long three-point counter and her six-for-six free-throw show that – coupled with a pair of Kadence Conley fielders and a Meredith Wheeler two-pointer – still had the visitors up by yet another slim 35-34 count heading into what would be a tense eight minutes of fourth frame play.

Thankfully for the home team Lady Dawgs, the cream rose to the top – as leading scorer Lexi Howe, and the never-say-die Tri-Valley defense saved the day, with Howe’s four points, a key Tailor Dupler counter, free throws from Riley Tracy and Eva Dittmar, and yes, the DEFENSE, were the difference, as Coach K’s charges rallied, outscoring the Lady Celtics 9-5 in the fourth quarter, and withstanding a last-second shot, to put an exclamation point on 2020 with the hard-earned 43-40 win.

Howe’s game-high’s 17 points led the winners, who also got 13 counters from Riley Tracy for the Lady Dawgs, who netted just 14 of their attempted 27 free throws, and three of their launched 10 trey attempts.  Amaris Lowery’s 15 points and nine counters from Ali Ford’s trio of treys led Dublin Jerome.

In an equally as entertaining junior varsity contest that tipped off the evening’s action, the visiting Lady Celtics topped the host Lady Dawgs, parlaying a dominating 17-point fourth-quarter performance by Dublin Jerome’s Addie Schoessel to a come-from-behind 47-40 win.

Ashley Dinan’s 12 points topped the Lady Dawgs in the scoring column, who also got nine counters from Kendall Baughman and eight from Lexi Littick. The Lady Celtics followed up Schoessel’s heroics with nine points from Kate Hughes, eight from Elise Van Karsen, and seven from point guard Kareena Gupta.

Coach Kurt Kaufman’s Lady Dawgs tip-off the 2021 new year with a home date on Monday, Jan. 4, hosting the Marietta Lady Tigers in a non-conference contest, then return to the friendly confines of their Rich Longaberger Court hardwood two nights later on Wednesday night, Jan. 6, welcoming a familiar face – and foe – to The Dawg Pound – Coach Marty Bice and his River View Lady Bears to Dresden for a Muskingum Valley League battle.

Coach Bice is well-known to the Tri-Valley area.  A former Scottie standout student-athlete, starting member of the 1981 Rich Longaberger-coached Final Four, TVHS Athletic Hall of Fame TV boys basketball team – followed by a highly successful coaching career in football and girls basketball stint at TVHS that included a 2005 Final Four appearance for the Lady Dawgs – Bice – and River View – are indeed no strangers to the Scottie hardwood.

River View joins fellow Coshocton County neighbor – the Coshocton Redskins – and the Meadowbrook Colts (from Guernsey County) as the Muskingum Valley League’s newest members for the school year 2020-21. (River View is a past MVL member, enjoying conference membership from 1975-2005.)

A final look –  at our Final Four! 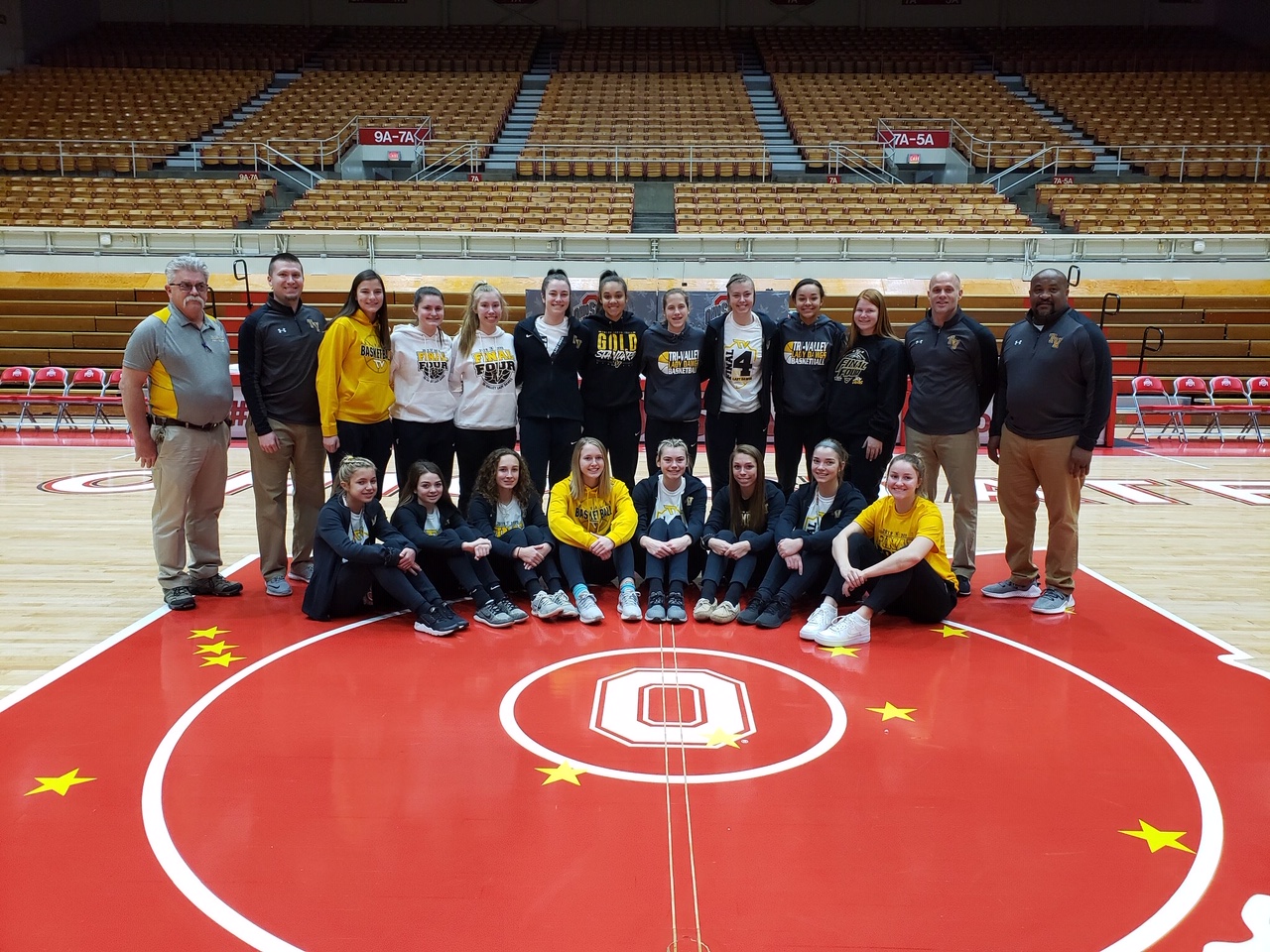