The season came to a close on Sunday, March 14 with the Division 2 State Tournament at Marengo Highland High School. It was an unusually modest setting for what’s usually held at Ohio State’s Schottenstein Center, but the competition was there for the much smaller crowd to witness. Tri-Valley sent three competitors to the tournament in Cullen Van Rooyen, Joseph Eckelberry, and Karter Jones. The three Scotties wrestled extremely well and put up a solid 25th place out of the 114 Division 2 teams that sent qualifiers.

126 – District champion Joseph Eckelberry started off the tournament strong with a :58 pin over Nathan Demangeont of Woodridge High School. In his quarterfinal bout, Joseph narrowly edged out Te’Andre Allen of Orange, 5-4. This win ensured that Eckelberry would place in the top 6. His first loss came to eventual state runner-up Alijah Stevens of Licking Valley. Stevens defeated Eckelberry earlier in the season 7-3. The score was the same in the semi-final matchup. Joseph was able to rebound with a 7-4 victory over Eddie Pinc of Medina Buckeye in the consolation semi-finals to vault him into the 3rd place match. In his placing match, Joseph drew West Virginia recruit and 2019 state champion, Garett Lautzenheiser of Louisville. Stevens had pulled the upset of the tournament prior to defeating Eckelberry, by pinning Lautzenheiser in the quarterfinals. Joseph fell to the Louisville senior, 11-1 to finish in 4th place. While his goal was to finish his career as a state champion, the senior Scottie is proud of the placement and the way he competed.

138 – District runner-up Cullen Van Rooyen also started off the tournament strong with a pin over Ben Breaker from Hamilton Ross HS. In his quarterfinals match faced Eddie Neitenbach of Medina Buckeye. Trailing most of the match, Van Rooyen tied it up at 9 with seconds left in the 3rd period to force overtime. He fell 11-9 in the sudden victory period. Cullen bounced back from the loss to defeat Amir Harris of Trotwood Madison, 13-6, in a match that where he had to overcome an early deficit. With the 2nd win in the tournament, Van Rooyen cemented a spot on the podium. In his 4th match, Cullen fell to Washington and Lee recruit, Harris Foad of Indian Hill HS. It was a back and forth match, but ended with a 7-4 defeat. In his final match of the tournament, the senior Scottie had a chance to redeem his district finals loss against Lisbon Beaver’s Devon Salsberry. Up 1-0 heading into the 3rd period, Van Rooyen got caught rolling through a move and was pinned. Despite losing his final match, Cullen was able to reach the podium as an 8th place finisher and achieved All-Ohio status. While the overtime loss was tough a tough loss for him, Van Rooyen left it all on the mat Sunday and wrestled some great matches, even in defeat.

182 – 4th place district finisher, Karter Jones, entered the tournament with an undesirable matchup with undefeated Cornell recruit, Justin Mayes of Bellvue HS. Mayes showed his prowess by pinning Jones in the first period. In his 2nd bout, Jones was able to shake off the early jitters by pinning Wyoming High School’s Jared Hancock in the 2nd period. In his 3rd bout, Jones faced Ontario senior, Karter Kroll. While he wrestled hard, Jones fell to Kroll by pin, ending his tournament one round removed from placing. While he did not reach the podium, Jones was able to prove that he belonged with the best in the state and helped add to the team point total that set Tri-Valley up for a respectable finish for having 3 competitors.

All three seniors competed hard over the weekend and proved that they deserved to be mentioned as some of the best wrestlers in the state. Two All-Ohio finishers marked the first time in school history that Tri-Valley had more than one in a year. In a season with so many restrictions, the Scotties showed incredible determination in putting together a great year that included MVL dual/tournament championships, 28 dual victories (school record), and a great performance at state. 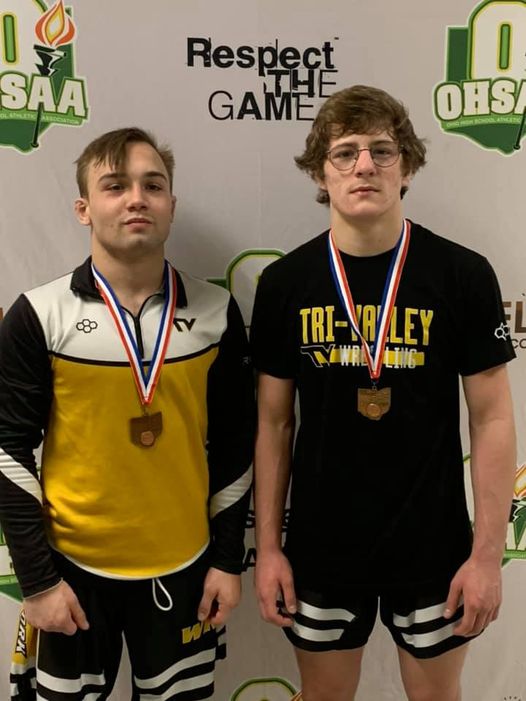